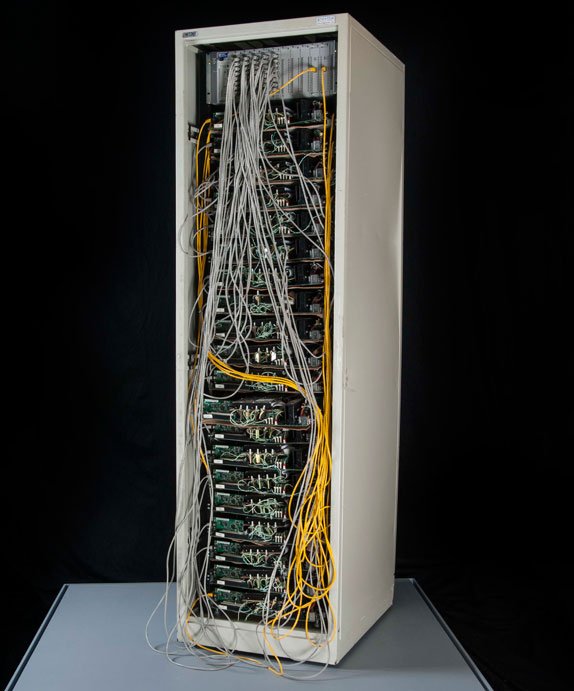 Try not to take offense my dear engineer.  Why?  Because you’re in good company!  Google built a very fine ghetto server system back in 1999.  Now they’re spending about 2-5 BILLION…yes, BILLION per quarter on Data Center Operations…they’ve gentrified (link)!  They called it the Google “Corkboard” rack which housed four small server motherboards, fans, power supplies, etc per “shelf” and they bought them from a company named “King Star Computer” in Santa Clara, California.  What’s even funnier is that King Star is still alive today and doing the SAME THING (link)!

As it turns out what most people today call unprofessional, not business class, hodge podge or yes…even ghetto is a completely normal thing to do in tech.  Why?  Because it’s function over form and I’ll take function over form all day long with respect to an IT solution just like Google did in the beginning.  To cut down on costs the first two “Googlers” Larry Page and Sergey Brin (now billionaires) gutted the idea of physical servers in their traditional sense.  How can we densify a 1U rack mounted server they said…what if we just put the parts into the rack?  Densify the system, just use the parts and cram more systems into a 48U rack, thus saving space, money and expense.  They did just that.  There are a few racks on display at Google’s Building 43, the Computer History Museum in Mountain View, CA, and at the National Museum of American History in Washington, D.C.  From what I can tell it’s a 4U switch at the top and maybe the equivalent of a 2U “server”.  They were running Pentium II’s!  Ahhhhhh…Pentium II’s!  Because they got 4 motherboards (4 PII’s) onto a 2U space…they called them “trays” they have about 80 servers in what’s typically a 48U or 48 Unit rack.  That’s tight!

Now dear reader and dear engineer…don’t think for one second this is an anomaly.  Why?

Because there are hundreds and perhaps THOUSANDS of companies all boot strapping their operations the same way.  Companies are STILL doing this like BackBlaze.  Their storage solution was built on commodity hardware, off the shelf!  It inspired Netflix…yes NETFLIX to build their own and a few other companies we’d all know.

Here’s the kicker.  This has now been taken to the next level of companies designing their own chipsets, processors, hardware, switching fabric, etc.  Big Brother Google and Amazon manufacture their own chipsets with built in encryption and security features.  Amazon also makes their own switches and servers.  Ask yourself…why would they do this?  Isn’t Google in search?  Isn’t Amazon into selling everything under the planet and distribution?  Well…sure, but they figured it out.  They control their own quality, design, distribution, cost, features, etc and get exactly what they want without having to answer and be beholden to an Intel, AMD, Qualcom, etc or their distribution channels or the overhead of trying to get a feature without cracking someone’s kneecaps!

If you buy a Cisco, HP, Dell or other switch there are a lot of features you’re paying for that you’re not using…what’s the point?  What’s dense and optimal about that?  That’s right…nothing at a certain scale.  Sure it’s good for most enterprises to shop Cisco, HP, Dell, etc but at a scale like Google and Amazon who have millions of servers, tens of thousands of switches and thousands of routers…it makes sense to BYOD!

If you need assistance building your first tech ghetto or perhaps you need technical gentrification reach out to us for sophisticated engineering talent.  Look to EITS because we just get it!  We understand how engineering solutions gets done and the life cycle of tech from birth to death.