Google and others like GoDaddy whom this post mainly focuses on are some of the biggest idiots in tech.  How is it you can say that Google and GoDaddy are idiots?  You’re nobody and they’re somebody!  Because they didn’t get to be where they’re at in this world as a result of personal altruistic philosophy that’s for sure!  Google did it better than Microsoft to get into your computer, home and brain.  GMail, Google + (which nobody really uses) and their Chrome browser are dominant in the marketplace because the criminals at Google leveraged their Android phone platform requiring users to signup for a GMail account just to use it!  When you visited Google’s home page (which billions did) using Microsoft’s Internet Explorer there was a widget popup telling you that your browsers was “insecure” or “not supported” with a download button to their Chrome browser.  That sneaky thing is still there today when you visit Google’s website and I’ll post a picture at my next earliest convenience of what it looks like.

If I’m not mistaken I believe Google also did this to FireFox for a short time if it detected your browser was not on the latest release.  For a while before Google had its own browser with Google Chrome it promoted FireFox!  Another annoying thing about Google was when you signed up for GMail by default you’d be signed up for Google + which is an opt-out process and not an opt-in process requiring to go make a Google + account.  That’s what the “GDPR” has done in the EU is made it a requirement to opt-in and not opt-out.  Rightly so!  Go EU!  Yes…Google in large part is an out right criminal who leveraged their dominance in search to pull you into their ecosystems whether you knew it or not!

So what about GoDaddy (HoDaddy)?  GoDaddy is also a criminal and sells you lots of things you don’t need when purchasing a domain name (a URL like: example.com) only you didn’t know you didn’t need them because GoDaddy told you that you did like “privacy”, email, shopping, a web builder, etc and yes…SSL.  Lets take SSL certificates for example.  See this picture below…this came to my GMail with the subject:  “You don’t want to go without SSL much longer” 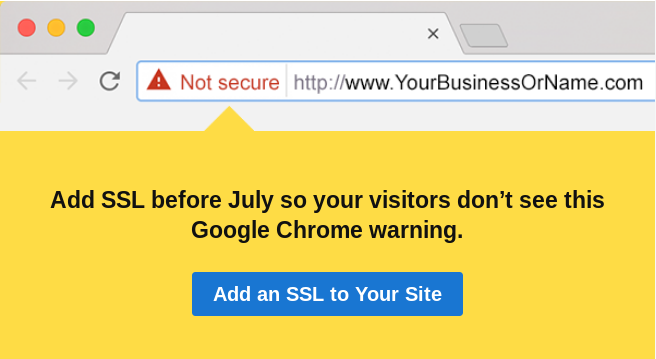 Oh, you’ve probably heard!  (Says GoDaddy).  Yeah, you probably heard the #fakeITnews that is.  Let me splain something!  SSL only encrypts the data ON THE PAGE.  It doesn’t prevent me from seeing the URL, what page you’re on or the search string in the URL.

An example of this is if you “google” something like “Presidential Pardons List” you get a search string that’s NOT SECURE (although the page is) like this:

Google and GoDaddy didn’t make the Presidential Pardons List by the way because neither have been charged nor convicted of any US Federal crimes…yet.  The results in the page are “secure”, that is to say…the results in the body of the page.  I couldn’t see what the results are but I know where you were and what you searched for.  In fact, I could just copy and past the URL to see the same or similar results.  Is this “secure”?  No…it’s not.  You can not debate this.  It’s not secure, end of story.  Regardless of encryption GoDaddy it’s NOT secure!  This demonstrates more technical ignorance on behalf of big tech companies.  Guess what?  Google too!  Yes…Google is ignorant!  They all just want to push their agendas.

Now…if you go look at our website each page is “encrypted” but the content on the page can be looked at by anyone.  Nothing on our site is transactional like a store or bank which has temporary unique URL’s tied to your user for a particular transaction.  If I’m a snooper I could go to static URL’s that are httpS on our website and see the exact same information as you did like this very website you’re reading now.  Why?  Again…because the URL isn’t hidden or encrypted but the body of the page (the content) is except that it’s the same content all the time, all day and for every visitor like other visitors reading this very content like you!

Why do you need httpS and secure browsing if you’re looking at HGTV’s website about barbecue techniques or how to paint your room?  In my opinion you don’t.  Using SSL everywhere indiscriminately doesn’t make the Internet more secure because not everything needs to be secure!  Is our site secure?  Yes but only as a matter of practice and because we’re a tech company so it’s expected however pointless it may be.  I personally love how GoDaddy uses an Internet Dictator like Google’s forced use of httpS (secure http) to sell sell sell and fear monger via #fakeITnews spam in my inbox.  Additionally GoDaddy Marketing Department; simply having SSL on your website if everyone else has it won’t boost your search rankings or get more traffic to your site.  SSL has nothing to do with SEO outside the fact that an Internet Dictator like Google values it for some arbitrary reason.  What matters with respect to SEO are the words on the page.  The email from GoDaddy is #fakeITnews and quite frankly false advertising!  Google’s supposed requirement is also a truckload of…well, we’ll keep it G-rated…poop.

This somewhat speaks to a larger problem that the Internet is moving in a ridiculous direction because of big corporations who control the tech.  Remember when Google and others came down on some SSL providers (link) and put them out of business?  No?  You didn’t?  You didn’t see that in your feed?  Hmmmmmm…perhaps it was censored :).  The real reason Google banned these SSL providers and put them out of business at its core is because Chinese hackers hacked Google when Google entered the Chinese market (link) and Google is but hurt on the whole thing to this day.  Google won’t confess that this is the real reason instead they blame it on some back dating of SSL issue dates and take the arbitrary view that some company is issuing insecure (it’s actually unsecure) SSL’s that are using SHA-1.  It’s like trying to find an excuse to fire someone so you can fire them for almost no cause.  There you go…Dictator Google telling the world how to act.  Google put those two businesses out of business and I don’t agree with that ignorant bully tactic.  Google has too much technical power to target, suppress and demolish anyone they don’t agree with.  They did it with SSL, their search algorithm silencing parts of the Internet you may or may not know, you see it on YouTube another Google property that funnels you into extreme points of view thanks to the algorithm that suggests other videos each one getting progressively more specific until you’re an Anarchist, Communist or a Fascist :P.  YouTube (Google) along with FaceBook was at the heart of our 2016 elections in the US.

So what if a company is issuing SHA-1?  Internet Explorer was compatible with old tech for a lot of years and for good reason.  It’s called backward compatibility!  Maybe for some reason a company needs to use SHA-1…?  Perhaps their web servers can’t manage anything newer and maybe their web server stack can’t be upgraded for some reason?  There might be lots of reasons…who are you Google how to tell someone how to act?  Oh…an Internet Dictator that’s riiiiiiight.

So dear reader…should you get SSL?  Sure…but not because it’ll make your website “more secure”.  It just won’t.  I can still throw an SQL injection at you and hack your website over httpS 🙂

If you need assistance with anything technical including seriously simple to understand concepts others including Google and GoDaddy might be having problems understanding like httpS we’re the company you NEED to contact.